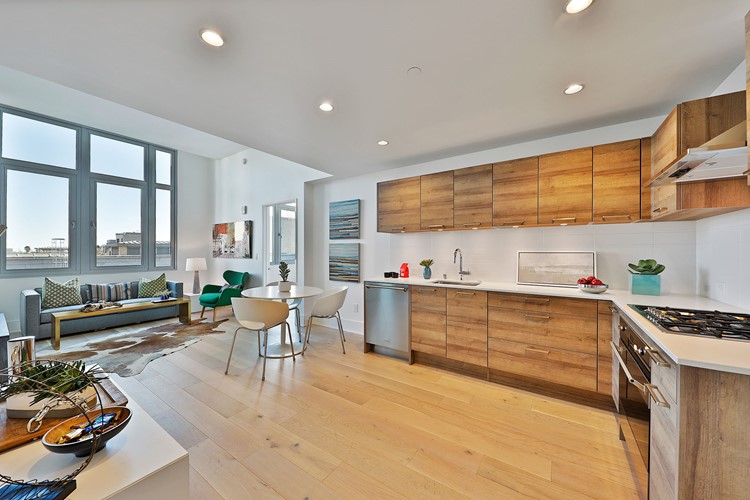 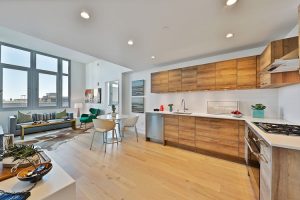 San Francisco’s vibrant tech hub is at the front door at the recently built Stage 1075. Twitter, Uber, Airbnb, Salesforce, Facebook, Nerdwallet, and Dolby are nearby. The greater Bay Area is accessible from the BART/MUNI station on the same block. The neighborhood is at the dynamic crossroads of the city’s best from shopping in Union Square, Broadway shows at the Orpheum, Vietnamese pho in Little Saigon, and happy hours at trendy SOMA cocktail bars. 2020 kicks off the Better Market Street project including transformative transportation, streetscape and safety improvements to San Francisco’s bustling thoroughfare. Mid-Market residents will be steps away from the new 55,000 square foot Whole Foods, brewery, and food hall at 8th and Market opening in 2021.

This penthouse is the last available unit in this new neighborhood addition and ready for your cosmopolitan life in the heart of San Francisco.

Before being revitalized by the 90 new modern residences of Stage 1075, the site was occupied by Grauman’s Imperial Theatre originally built in 1912. San Francisco architects Cunningham and Politeo designed Grauman’s Imperial Theatre for the theatre owner Sid Grauma who later went to Los Angeles where he opened the famed Grauman’s Egyptian Theatre (1922), Grauman’s Metropolitan (1923), and Grauman’s Chinese Theatre (1927). Grauman owned the theatre until 1917, after which it went through several iterations as the Imperial (1916-1929), Premier (1929-1931), United Artists (1931-1972), and finally the Market Street Cinema (1972-2016).

Stage 1075 was built in its place in 2018 and pays homage to the site’s theatrical past with the restored stained glass work in the common area from the original theatre. The area continues its legacy as a theatre district with the Orpheum, Warfield, A.C.T. Strand, and Golden Gate Theatre within blocks.

Market Street has been San Francisco’s main thoroughfare since the boom days of the Gold Rush and continues to be as the city evolves in the 21st century. The Better Market Street initiative will deliver transformative transportation, streetscape and safety improvements along 2.2 miles of Market Street between Octavia Boulevard and Steuart Street. This transformation will renew and enhance Market Street as one of the City’s most important connectors of its iconic neighborhoods, thriving businesses, cultural activities, transportation hubs, and public spaces.

Long term the project will bring increased safety and a vibrant streetscape with new furnishings, plantings, public art, and renewed/replaced infrastructure. In early 2020, SFMTA will kick off Quick Build enhancements to increase safety and improve MUNI transit including: